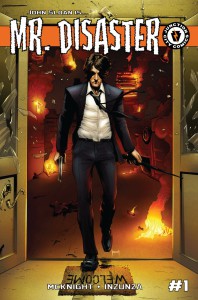 It seemed like I always gravitated around creativity. I was always daydreaming in school, yada yada. I can’t say there was any specific inspiration and it was never encouraged, just something I always liked doing. Writing comics, poems and playing music are just tools I use to get that out. I honestly wish I learned to draw.

I’d say it’s been the people I’ve interacted with throughout life. To experience all kinds of personalities and understanding these traits all stem from something. Every well-written character has a core ideology where most of their decisions should be made from. Like people, it doesn’t have to be a conscious thing for the person, but you should know it or you’ll wind up with an inconsistent character who bends to the will of your plot.

I would love to take this time to name drop but, honestly, anything created by a creator who poured his/her heart and soul into the project is probably the best inspiration for me. 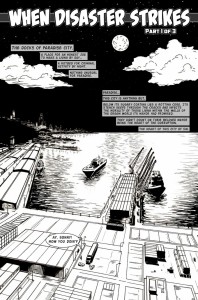 Mr. Disaster is a part of a larger universe consisting of two other books; The All-New Union and The Fancymen, each with its own author. With this in mind I’d say the most important thing is the ability to compromise for the bigger picture. You can’t get stuck on a plot device and be stubborn about things that will affect the entire universe. No room for the “my way or no way” attitude. Creating something like this requires the ability to build ideas off each other but to also offer constructive criticism.

What are some themes you hope to explore in Mr. Disaster?

I recently went through some things in my life with people and the same concurrent theme seemed to be present in all of them. Once, they do something they allow themselves to completely become it. In Mr. Disaster, the core of his story will be that you shouldn’t let your past dictate your future. Making mistakes is a part of living but its the recurrent ones that make you who you are.

How did the concept for Mr. Disaster come about?

A guy I knew was trying to put together a Mutants & Masterminds game and asked me and the other two authors to be in it. As we were building the characters we decided that we really liked them and the more we talked about it the more the universe started taking shape. We wound up not really even playing the game but started writing story lines of our own.

Mr. Disaster is clearly influenced by hard-boiled, noir fiction. What is it about these types of stories that speaks to you? 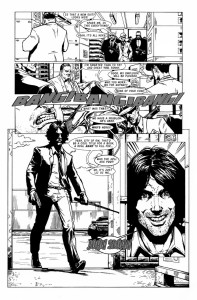 It’s great that feeling came through for you because it is exactly what I want from it. There’s something about those kind of stories that get me. I’m not sure what it is but in the Glass Key, for instance, Ned Beaumont is captured by Shad’s guys and you see a complete breakdown of character as he spends an undetermined time being beat up periodically. Then he finds whatever is available and lights the mattress on fire, only to get beaten up some more and thrown into another room. This room, however, has a window where he makes his escape. What I like in this scene is Ned didn’t know where they would take him or what they would do to him but he did know SOMETHING would happen and something was better at nothing at that point. It’s cool to see a guy without a full-proof plan and just works with what he has. I feel it makes him slightly more human.

I’d love to see Declan Shalvey do a comic version of Legacy of Kain. Just a personal preference. His work on Ellis’ Moon Knight was fantastic. Also, I’d love to see him do Mr. Disaster, but that goes without saying.

There’s definitely a ton on the back-burner. I have a bunch of songs written that I’d like to see recorded, a book I’d like to write, some poems I’d like to submit, but as far as comics go we have the stories planned up to a specific event that might not really come out for

quite some time. I also have another book in the works (first issue written) that takes place in the future in the same universe. Even Disaster isn’t fully completed as far as the writing goes but I have a ton of ideas swimming around.

Hmm, tough question. I’d have to start off with the Terminator, right? Movie opens up with a bar fight and he seemed to handle
himself. Rick from the Walking Dead because he’s such a badass. Big Boss from Metal Gear, but hopefully he won’t keep us waiting. The Hound from Game of Thrones and after he’d eat every f$#%ing chicken in the place and for my last pick, I guess I’d have to go with Hank Chinaski. What kind of a bar fight would it be without him?

For more interviews with independent artists and creators, check out We Love Your Work #16: Travis Huffman