This is We Love Your Work #16: Travis Huffman. Travis is the writer/creator of The Stalker published by Last Sentry Comics. The Stalker is a killer throwback to the pulp/noir roots of comic book characters like The Shadow, The Spirit, and the Caped Crusader himself. This a really cool book and if you have the means and love good ol’ fashioned crime fighter stories with a dash of mystery, consider supporting their Kickstarter campaign. Here is our conversation… 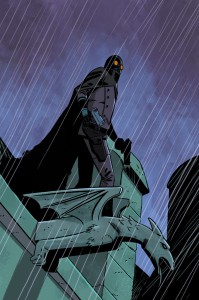 I’ve always loved fictional stories of heroes and villains. I was big into the whole pop culture genre before it WAS a genre. My family has always been supportive and encouraging. It is impossible for me to even sum up how much my family and friends have done for me. One distinct moment changed my life forever. My parents bought me The Flash #1 in 1987. That was the first issue of the series after Wally West took over as The Flash. Up until that time I had only known superheroes to be kind of…well you know…Superfriends silly. In this issue I had discovered Barry Allen had died, which was shocking. There was just this whole other world of exciting stories out there I had not known about. After that I was hooked. I wanted to know more, so I started buying the old Who’s Who comics from DC. That’s what got me into designing and writing comics. I just started making up characters and origins. I filled up dozens of spirals with character designs and stories.

I have always been a Stan Lee fan. He’s the godfather of comics as far as I’m concerned. I’m a huge Mark Waid fan also. I think he is a great storyteller who just gets the characters he writes. Geoff Johns’ work is also something I enjoy. I’m a student of the game, so I study everyone’s work. I just love comic books. The most fun a guy can have, is sitting down and studying comic books.

I get asked this a lot. I find inspiration in everything. It is strange because I can be driving down the highway and see something that makes a story pop into my head. It doesn’t even have to be something major; I can see a field of grass and then, poof, I have a story being written in my mind. I see people or places that create visuals for me to write from also. Most people look up at the sky and see clouds, but when I look up I imagine people flying around through the air. That’s just me! I also study history and look at old photographs in order to get ideas.

When I write, I like the ambiance to be a certain way. I prefer to write at night, with warm toned lights in my desk area. I usually write while listening to musical scores from movies. (Amazon Prime Music is the greatest thing ever for finding great scores.) I sometimes listen to loop sounds of the ocean as background noise also.

I also keep a daily/hourly planner. I not only write comics, I’m also the owner of the company, which means I have a lot on my plate. That is why I love the Gallery Leather planner specifically. It is an old school paper planner, which separates the days by the hour. I think technology is confusing sometimes, so the classics work much better. I also use cheap spirals to jot down information throughout my day. Finally, before bed, I use a classic Spell-Write Steno Book to write down the things that worked during my day and the things that didn’t work during my day. It helps build my focus for the next day.

What are some themes you hope to explore in The Stalker?

How did the concept for The Stalker come about? 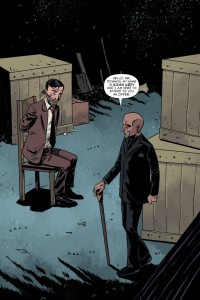 I created The Stalker in the 6th grade. He was my first superhero. I wrote tons of versions of the character all the way up to adulthood. I almost got to publish the character in 1997 through a small press, but that fell through. Later I started working with my friends, Patrick Yarbrough and Heath West, on creating some new characters. When that was placed on hold, I decided to reinvest some time on my old creation, The Stalker. In 2004, I wrote the new story using the pulp version of my hero. I hired Juan Romera as the artist and Tom Mandrake as the cover artist. I published 3 issues of The Stalker starting in 2005, but due to unforeseen circumstances, I had to put a temporary hold on making comics. In 2014, I decided to go full steam ahead into the comic book world. Last Sentry Comics sort of restarted. I was faced with the tough choice of either continuing the old Stalker series or starting over with a new Stalker series. I felt like I had improved and Juan had improved over the last 10 years, so it was best to begin with a fresh new story. That’s when I decided to utilize all versions of the character I had created since childhood. I really wanted everyone to enjoy this series, so I made it more about adventure and excitement than gritty or real. The original series was a little more grounded, where this one is epic and broad.

That’s a tough question. I’m going to have to be selfish here and choose my own creations. Honestly I am a huge Alex Toth fan. To have him draw my characters, The Crimson Hawk and Ghost-Girl would be awesome. He was an amazing artist and designer. He passed away in 2006, but I study his work frequently. He was brilliant.

I have to throw this in also. I have always wanted to write a pulp era version of The Stalker story with Tom Mandrake on art duty. I was a
big fan of his run on The Spectre back in the 1990’s, and have always wanted to work with him. Up until now he has only done covers for The Stalker, but he has agreed to do a Stalker story with me for the Kickstarter campaign, which is really cool. I might get to see this all come to fruition if we can tap into that stretch-goal on our Kickstarter…so go contribute so that can happen! 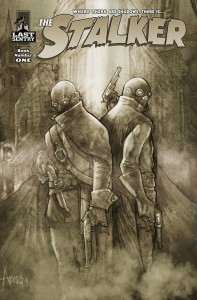 for a project whose full scope you’ve yet to be able to map out?

We have an entire universe of stories to tell. We have the beginning, middle, and end planned out for our entire universe. I wish I could publish every project we have on the back burner right now. I love storytelling, and the one thing I have learned is, good things come to those who wait. Life happens, stuff gets in our way, but that sometimes is the best thing. I can’t tell you how many times I’ve been delayed on a project only for it to be so much better once it finally sees the light of day. Great stories are like fine wine; they get better with age.

This is tougher than it sounds!

For more from Travis Huffman and Last Century Comics, visit www.lastsentrycomics.com and “like” them on Facebook at www.facebook.com/LastSentryComics

For more interviews with independent artists and creators, check out We Love Your Work #15: Tessa Beatrice & Zack Rocklin-Waltch