In this edition of We Love Your Work we are talking with the creator/writer/artist Vincent Moreau. We got to talk a little bit about his background and his affinity for science fiction. Vincent’s flagship project is Deviant: Secret of the Drowned Universe, a webcomic which you can read at www.deviantcomic.com as well support through Patreon. 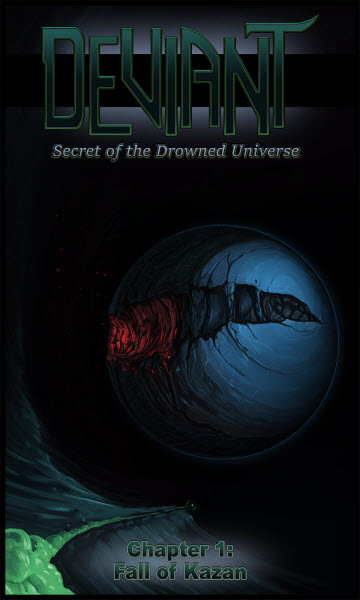 Well, my names Vincent, my parents were both animators and special effects people in Hollywood, I’ve just always been drawing. always been around art. It’s just what I do all the time. It’s my hobby.

Walking Dead comes to mind, I just love how so much is shown through expressions, and visuals. There are very few walls of text, and when there are walls of text it’s usually well worth it. Lots of ‘show don’t tell’ and all that  . “Don’t Dead, Open Inside”.

I just like sci fi in general. It’s kind of my favorite genre and I have been known to be overly critical of scifi movies and shows. But instead of starting a blog or opening a youtube channel where I rant about it I thought It’d be more fun and a better test of skill to create my own. As for movies I really appreciate… I like Forbidden Planet. Great movie. 1950 cheesy scifi goodness with a creepy tone, a creative story, awesome ideas. Most that movie is just this Dr showing off ancient alien technology to young space Leslie Nielsen, it’s great.

Video games were probably a better inspiration for me, you can just get better atmosphere, you can explore at your own free will and understand the mechanics of the universe the creators put you in. Bioshock for instance I always sai

d you could probably remove all the enemies in the game and still have fun just because of how beautiful and unique it all looks. There is just a story in most every room and hallway.

I have a collection of ‘art of’ books from various video games.. at least I did. Anyway I loved looking at the artwork in these things because there stories behind the pictures. Things had to have a certain level of relation to their world, things have to make sense. I like that. 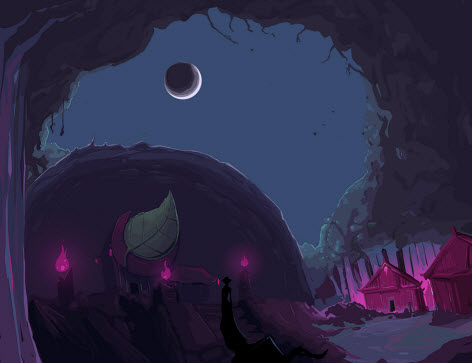 I’ve used most every art program I could find. I enjoy many of them, Sai, Manga Studio, Open Canvas, Blender, but mostly I fall back to Photoshop.

How did the idea for Deviant: Secret of the Drowned Universe come about?

I’ve been working on the story for a long time now, I put a lot of work into making sure it made sense, which was not easy. I set out to make something original and I think I succeeded in that. From how the planet moves to the Vinefields, to the concept of Daybreak. Space itself is very different from what people are use to. I think I have a really cool, unique and interesting universe.

I wanted to write my own story because I often just get frustrated or uninterested in other science fictions and how they never explore what is interesting. Instead sci fi to them is a back drop. An excuse to have different species. cyborg arms or some weird piece of tech to move a plot along.

It took some time figuring where best to start the story. Deviant is the current up to date story, and I also have “Frident’s Notes” going which is a prequel to Deviant that tells the story of “The First War” from a first person perspective. It takes place about half a lifetime before the events of “Deviant”. (Kind of like how Robert’s Rebellion is a prequel to Song of Ice and Fire and is the cause of the state of the world at the start of the Game of Thrones.)

Sci fi almost never goes into detail of what is really interesting. -Heh, I just wrote a bunch of potential spoilers, so I’ll just leave the answer there.-

It’s free, wide spread, more fun. Originally I abused this fact. I used Imgur galleries as the first place to put it, I had them in comic strips, small one line of panels. But I found it impossible to really show scale in such small space. So I decided to go the other route. Making pages as long as I wanted, because why not? It’s digital, at the time I had no real plan to ever physically publish it. That worked for a bit. Using this method I was able to complete three chapters. I liked to publish in bulks so this allowed me to just have fun with the pages and upload when I wanted, a chapter or half chapter at a time. I also tried making a animated comic version, a flash comic version. Those were fun. I was getting tired of the constant re-edits I just wanted to simplify the thing into one final comic edit.

It’d be fun to see Picaso paint something he saw from Top Gun.

Two actually. First is a pokemon fan comic called “Perish Song” which were going to be dark pokemon stories based off the games. Pokemon is a dark universe, a lot of people don’t see that. I kinda wanted to do my own ‘tales from the crypt’ but in the Pokemon universe. I did a few pages and even prepared it for a animated youtube vid. Voice acted and everything. Uploaded a silent sloppy animated version onto youtube to give to friends so they could voice act. I told them if they did the audio, I would do all the visuals. Art, Animation.. So it’s on hold. http://imgur.com/a/S7GCM#0

The other is kind of a even more twisted story, it’s going to be a mature fantasy comic that so far just has the working title ‘succubus’. I have most the first chapter all drawn out, Probably best not to go into detail about that one right now. No clue how I’m going to publish that comic.

Maybe a Comedy? I don’t know. I have plans for a horror, action, scifi, fantasy, adventure. Unsure… I don’t know how fun a comedy sounds.

Only need one. Phil Connors from Groundhogs Day, Just because by the end of the fight I’ll end up owner of the bar if not President.

For more on Vincent Moreau you can read his comic at www.deviantcomic.com as well support through Patreon.

For more interviews with independent artists and creators check out We Love Your Work #13: Dan Hupalo