J.G. Birdsall is the creator behind the former web series and future Kickstarter funded comic, Venus Rises.  J.G. was kind enough to talk to us about his process and how his creative journey has led him to where he is today. Check out our conversation below…

Regarding drawing, I did have an inclining for art.. drew my own fantasy, comedy, sci-fi comics all throughout my middle school years, which led to me pursuing art in high school.. even as far as looking at art colleges.

But back in elementary school my father bought an old school Betamax camera (back when VHS was the inferior brand) to record home movies.. so by middle school I started to record my comic
s on video. This sparked my interest in film-making.. and I spent high school putting my friends in front of the camera creating a myriad of comedic spoofs.

By the end of senior year I had a choice to make.. either keep to comics or pursue a career in movie making.

This is where I came to the painful realization that my drawings weren’t as good as my fellow classmates. That’s was when I packed my bags and went to Full Sail School for the Recording Arts in Winter Park Florida.

My parents have been big supporters of my decision.. maybe even to a fault as here I am 20 years later still putting everything I can into Venus Rises. They’ve been with me through all my ups and downs.. always telling me to not give up.. to keep going. Other parents would have said, “Cut your hair and get a real job.” Mine still told me to cut my hair.. but always told me to pursue my dreams too. What other parents would put up with their child building spaceship sets in their home?

I do like J. Michael Straczynski because I was a fan of Captain Power as a child.. and later Babylon 5. Another influence is Joss Whedon mainly of because of his ability to create dynamic characters who feed off one another.

Science, Nasa, Astronomy, all tickles my fancy beyond belief. We truly are conquering the last known frontier. With Venus Rises, not only am I making a civil war in space, which is where I am getting the drama from.. but it also includes the science and technology of how to really conquer said frontier. It isn’t a matter of if.. but when.

How did the idea behind Venus Rises come about?

Believe it or not, It came from the desire to do a Star Trek fan film. I started to formulate a story, build props, gather costumes, purchase video equipment (microphones, cameras, green screen, etc), hung casting call notices at the local college, and even approached a Star Trek fan club.. but nobody wanted to be part of it. I was putting all that work into something that I ultimately couldn’t own, so I ditched it.. and begun creating Venus Rises. The common news story at the time was the war on the middle class, so I took from that, and created the Venusian uprising. But the jist of VR is to dive into the actual technology of it all. And to create real characters and show how they survive day to day in the harshness of space.

You currently have an open Kickstarter campaign, what do you hope to achieve if your campaign is successful?

Finally a chance to tell my complete story. Up to now, I’ve only been able to present parts of my story. With the webshow I had to confine my ideas to tell a condensed version due to monetary restraints. The comic will allow me to finally match my imagination. I’ve been working on VR for 14 years and hopefully the Kickstarter will finally give me the opportunity to share it.

Do or do not, there is no try!

What I would like to see before I die, is to see actual science/exploration back in Star Trek.. there is too much Star Wars mixed into my Star Trek right now. (Albeit a fan of Star Wars as well, I just feel that these two themes need to be separated). 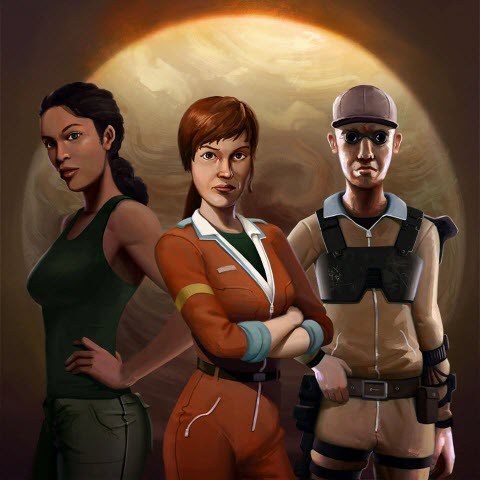 There are so many different stories to tell in the VR universe that I would like to someday make it into a proper movie, or another webseries with a much bigger budget.

I do have a non VR related idea that I would like to pursue. Just like how VR approaches sci-fi in a factual manner.. I would like to approach super heros in the same way. A story of a child during his adolescent years.. dealing with puberty and his newly discovered powers.

If you are digging the cut of J.G.’s jib, consider supporting his Kickstarter campaign by clicking HERE.

For more interviews with independent artists and creators, check out We Love Your Work #11: A.D. Puchalski