A.D. Puchalski is a prolific artist and writer with whom we recently had the pleasure of talking. She is the creative force behind Meadow, Restless, Tough, and Sword of Fray. Check out our conversation below… 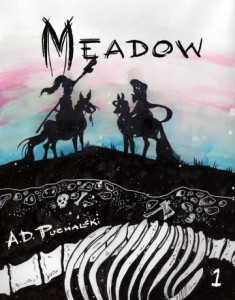 My Grandfather was a fine artist and an art teacher. My training from him was pretty intense and formal. I went to The Art Students League of NY because he went there. I don’t think (as a young person, anyway) that anyone thought my doing comics was a good idea. I was told frequently there was no future in art, and certainly not in comics. But there was no end of art supplies available and my grandfather built me a small drawing table when I was 14. On the other hand, I have a pretty distinct memory of telling my mother I wanted to be a cartoonist and her suggesting that I become a sanitation worker instead.

My writing style is pretty solidly visual. So my influences tend to be people who also wrote for visuals: Edward Gorey is a big one. Tove Jansson. I read a lot of Joan Aiken and Roald Dahl as a child, and had a thing for dark fairy tales and classic literature like Dickens and Poe. I don’t think that particularly shows much though, except for a leaning towards macabre or a somewhat grim view of things. Most of my writing starts with a drawing and the story develops off the backs of the characters, or even on something as vague as a single image. I see an environment in my head and the plot forms around it.

I read a lot, I read a little of everything — nonfiction, novels, comics, history, whatever. Fringe manga like Q Hayashida, whatever Joann Sfar and Lewis Trondheim I can get hold of. I’m married to a film critic, so there’s no end of television and film available. I’m partial to “pretty junk” which usually translates to artistically informed pulp. Luc Besson’s Leon and La Femme Nikita are favorites. There’s a great Australian tradition of action films with arthouse visuals that speaks to me on a really basic level. I saw Picnic at Hanging Rock on a big screen when I was very young and I think that formed a lot of what I seek out for inspiration. But just so I don’t sound completely pretentious, I’m likely to throw on Evil Dead 2 or They Live if I need a bit of distraction to get my imagination running. I listen to music when I’m drawing — but my tastes are all over the place. I always wear headphones. People dread being in the car with me if I’m in charge of the music. I live in the shadow of NYC so it’s pretty easy to walk out the door and find something I’ve never seen before without trying very hard. 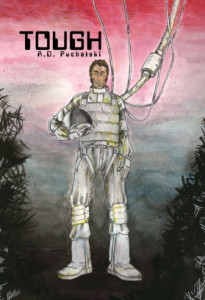 Edward Gorey and Charles Addams shaped me in a huge way. They were both NYC local and that showed in their drawings. We went to The Metropolitan Museum of Art and the MoMA regularly. Toulouse-Lautrec and Yoshitoshi had a huge impact on me along with Dali and a host of historical art…The Temple of Dendur alone! Plus George Herriman — I’m dyslexic and it took me forever to learn to read and spell. Besides being incredible, Krazy Kat made sense to me long before much else did. I had a lot of untranslated manga (before the boom), and I recall a lot of Gegege no Kitaro and Saint Seiya. I “read” by the art alone. My parents were “progressive” and rejected mainstream American culture, so I had Asterix and Tintin, the Moomins, rather than superhero comics, Archie, etc. I discovered Moebius in my early teens. Jean Giraud changed the way I thought about comics, in particular his color choices and the way he drew architecture and vehicles with this organic feel. I lucked into some Bill Sienkiewicz New Mutants comics around the same time. I had no idea that was an aberration. I was sure it was the future. I have the original run of Stray Toasters here somewhere. I watched, sporadically, the English language version of Les Mondes Engloutis by way of the student lounge when my mother went back to college in the mid-80s. That was huge for me, too.

I started out learning all the “right” materials for comics. I don’t think I use a single one of them now. I never use india ink these days, long gone are my colored inks. I’m partial to this lightweight paper by the Japanese stationer L!fe that takes color really nicely. I have to slice it out of the bound notebooks which is all I can get easily. I did my full color comic Meadow with a cheap watercolor field kit and some dye pens. I inked it mainly with disposable brush pens. Somewhere near the end, I found these cheap fountain pens ($5!) which is my main pen now. I also like to do my layouts on a grid with equal size boxes in a style I associate with French comics mainly. It allows me to be a lot more free with my art rather than the page layouts dictating everything. I use a computer a lot for my commercial work, so at first I tried to do everything by hand including my balloons and lettering. That didn’t last though. 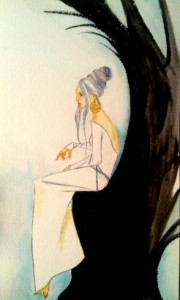 Meadow is my primary title. I really didn’t have any purpose when I started it, and I feel like it reflects me best. I had a bad burnout a few years ago and spent some time not really doing any work of my own. The first six pages of Meadow, in which two children on Mongolian ponies text each other on cell phones and then have a run-in with a dragon, was drawn just to amuse myself. In doing the art I invented all this background material — it’s post apocalyptic but in a gentle way, most modern technology is gone but comfort things like cellphones and electric guitars and vinyl are still there. So I kept going with the story, which became stranger as it went. I’m working on the next issue now. It’s fantasy but with a modern edge to it, and it’s relatively all-ages friendly. Not as violent as Sword of Prey (super violent sword and sorcery parody), not as creepy as Restless (monsters, kids, Smurf-zombies).

I don’t really do a lot of digital publishing actually. I guess I should, but since I prefer reading paper books myself, anything longer that a two page throwaway gets at least an ashcan treatment. I would like to do a web comic but mostly I find that doesn’t lend itself to longer storylines, and that is what I do right now. Or I just love paper.

Joann Sfar drawing Tezuka’s Black Jack. Most of what makes it to the States of Sfar is the more serous, historically informed narratives, right? But he does incredible pop-culture stuff, too. Black Jack with his vampire wardrobe and Pinoko the sentient tumor… it sounds like one of his stories already. Or Taiyo Matsumoto drawing Blueberry, but that seems like a really obvious choice.

Is there a project that sits on your back burner that you wish you had more time for
or perhaps an idea for a project whose full scope you’ve yet to be able to map out?

Way too many. Though most of what gets sidelined are my projects that aren’t drawing — toy-making especially. I had a real following with the toy stuff at one point, but I just love comics and I’ll always choose them first. At the moment, the big back burner project is the next Restless, but I’m determined to get into Meadow 2 before that. Restless was this simple idea: a girl sneaks out when she’s not supposed to and gets taken to a monster party on Halloween night. It was going to end there but then I had another idea and it extended into a full comic. By the time I finished I had the next arc mapped out. Restless is so easy to fall into… drawing monsters is fun. I’m saving it for when I need a break from doing a big, full color story. 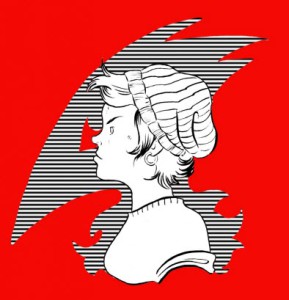 I would like to tackle someone else’s work — I think The Borribles would make a pretty incredible comic and be a real challenge to adapt well. Or maybe some stories from the Shahnameh. I’m working on something now based in Norse mythology (vaguely anyway). Or I would like to do a really bleak fairy tale series. I like folklore so long as I can toss in some ponies and sci-fi elements, or make it extra mean. I also love to collaborate with other people and it’s been a long time since I’ve had the chance.

Oh man… anyone taller than me so I can stand behind them, and I’m not a short person myself. How about Sigourney Weaver (she’s my height)? Yoshitoshi wouldn’t be a lot of help in the actual fighting is my guess but he drew a lot of battle themed art, so yeah. Maybe Lennox Lew is to handle any real punching backed by Charles Addams — he collected armor and medieval weapons. Oh, and Vincent Price, he’d cook us a gourmet feast afterward. That sounds like a great party.

For more interviews with independent artists and creators, check out We Love Your Work #10: Tanner Leigh Carter & Jamie Dee Galey