In this installment of WLYW we are talking to Tanner Leigh Carter and Jamie Dee Galey. Tanner and Jamie are the creative team behind the webcomic, CANON. CANON is a universe-bending, genre-hopping, time-warping epic that gets updated with new pages every Monday, Wednesday, and Friday. Check out our conversation below… 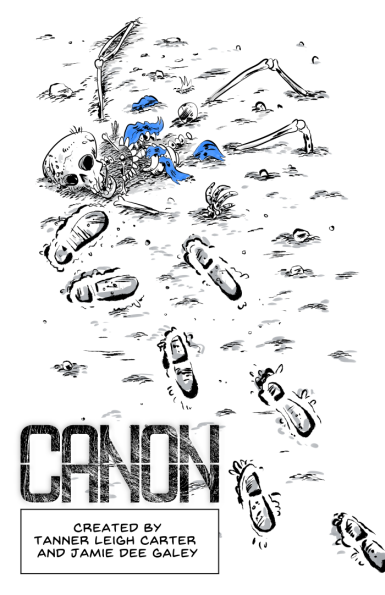 Tanner:  I remember my mother not having a filter on what movies I could and couldn’t watch. I saw Terminator 2, Alien, and A Clockwork Orange before the age of ten. Early on that gave me a strong interest in Science Fiction and movies.

My largest inspiration to write comics was Lewis Lovhaug (AKA Linkara) and his web series Atop The Fourth Wall. I had always had an interest in superheroes before that. But watching him really showed me how comics are an art form. I doubt I would be writing now if it wasn’t for him.

Jamie:  Oh man, I don’t even remember not drawing. My mom always had butcher block paper stretched out over the kitchen table and all the kids were always drawing on it. I found comic books in the mid 80’s and traced them for years trying to get better. My first real few favorites were all of the Image guys before they got into Image. Then when Image formed I got really into Sam Keith and Erik Larsen. And Frank Miller, Mike Allred and Mike Mignola from Legend at Dark Horse.

I stopped drawing comics for a few years and came back to indie comics being all the rage. It was here that I fell in love with James Kochalka and Jeff Brown and others like them. They really relit the fire and motivated me to draw again.

Tanner:  Robert Kirkman was a big influence for my first project, Symptom. He has this great way of going from dead serious to hilarity from panel to panel. Mark Waid, Scott Snyder, and Grant Morrison have been strong influences lately.

Your artistic style is very unique and you employ dramatic contrasts between white and pitch blacks with small flourishes of color. Can you tell us more about how you developed this particular style?

Jamie:  Coming from the old xerox mini comic field black and white is all I really ever thought in. Printed book is how I think about all comics I do. When I am scripting on my own I’m thinking page layout and page count. I try and work in 4 page chunks because a mini comics page number must be divisible by four.

As for the color splashes it adds more of a dramatic punch when it is not muted out by other colors. Tanner actually came up with this idea. It also saves me a bit of time when drawing a page not having to color it. 😉

Who are your greatest artistic influences?

Jamie:  Besides the ones listed above? Geof Darrow, Mike DeForge, Jason shiga and all those old Heavy Metal Magazine artists. Richard Corbin, Gaetano, Mirko Ilic, Moebius, I could ramble forever.

Tanner:  Mad Max: Fury Road and Bloodborne very much inspired how to think about storytelling. Both got me thinking about telling stories visually. I’ve really been turned off lately in comics and movies when the visuals are perfectly carrying the story and some thudding, poorly written, expositional dialog chimes in. Comics are a Visual Narrative. I feel that gets forgotten sometimes.

Jamie:  As a kid I spent a lot of time just running around the desert and woods with no shirt or shoes getting filthy, hurt and having a great time. I go back to those days when I draw and try to have as much fun as I can while making an organized mess. As for music while inking I will drink a few beers and put on some folky/country/punk/metal stuff. Hank Williams III, Amigo the Devil and Dethklok are getting quite a bit of play this week. 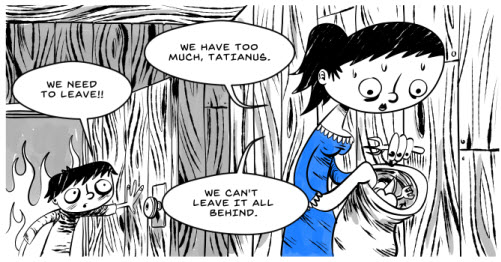 Tanner:  I have a meticulous approach to writing. Even before I get to writing the script, I write a paragraph synopsis then a page by page outline. Then I turn on the music, open up Celtx, and start writing. I can bang out 20 pages in a night if I stay focus. After the first draft is done, I let it rest for a week or two. Then I print it out and go over it with red pen. Once done, I open up Celtx again and bang out the second draft.

That’s been the whole process for longest time until CANON went into production. Now after the second draft is done, when it’s about to be sketched, Jamie and I go over the script. He’s really great at letting me know what does and doesn’t work. After his input, I go back to Celtx and bang out the final draft.

Jamie:  I’ve been fully digital for just over a year now and I love it. Invested in a Wacom Cintiq 22hd and wish I could buy one for all of my artist buddies who do not have one. The transition from slinging ink to full digital took about a solid week which was pretty painful. I 100% use Manga Studio 5 and am a Windows kid due to my poor upbringing.

How did the idea behind CANON come about?

Tanner:  Honestly, I haven’t a clue. CANON is a hodgepodge of ideas and stories that have cross my mind from time to time. There’s no way I can contribute CANON to a single moment in time.

The name for CANON was a long struggle I remember well. Even after I had written the first 60 pages and had many, many more pages outlined I didn’t have a name for the series. I remember the name came about during a long, arduous conversation on what was considered canon in the Star Wars series (this was about 8 months before Force Awakens). I just found it really interesting that 30 years of the Expanded Universe could be virtually wiped out and what was considered a part of this universe and that continuity was up to debate. I felt this idea was really in line with what I was writing.

You publish your work digitally, with updates every Monday, Wednesday, and Friday. What led you to choose that path and how do you keep up with that kind of schedule?

Tanner:  For me it was important to have multiple pages throughout the week. Doing anything less than three, the story would just move entirely too slow. 3 pages a week felt feasible to both Jamie and I.

Jamie:  Wednesday and Thursdays are set aside for drawing. Easy pages can be whipped out in about an hour but when Tanner adds 4 castles, 50 Footclan soldiers and other tough to draw stuff the page can fill the day.

Jamie:  I’d like to hang out with Joe Matt for a week and do a jam auto bio comic. I think our style mesh well and it would be an odd dirty filth filled week of fun. As for someone just drawing one of my characters, I’d like to have Rob Liefeld draw me in some cool sci fi story. A large portion of my earlier comics were fake journal comics and Rob is one of the reasons I draw comics.

Tanner:  Lately I’ve been seriously considering returning to Symptom. It was my first serious project. Twice now I’ve started it but haven’t gotten to a point where I was happy with it.

Jamie:  Adventure Book, Dustbowl, Lower-Middle Class. Those are my 3 long form books I have started and have not finished. Mostly because story wise I know the beginning, middle and end but I have no clue how to get there.

Tanner:  That’s the great thing about CANON, it’s a genre-hopping series. By design it can cover any story, in any genre, in any setting. It gives me opportunity to discover my breadth as a writer. By the end of the series, I’m hoping to have covered (including but not limited to) Horror, Sci-Fi, Comedy.

Jamie:  There isn’t a genre that I wouldn’t like to cover. This is the main reason I am working on Canon. Not to spoil anything but it is quite a genre hopping adventure. My dream art job would be a 4 issue run on Hellblazer though. Or some Grant Morrison mind fuck thing. 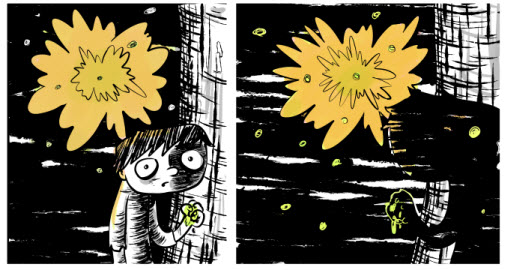 Tanner:  Firstly, Jamie. We have similar thinking and he can handle his liquor. Also, he knows a bunch of sick wrestling moves.

Secondly would be Hieronymus from One Hundred Percent Lunar Boy. Dude can seen the future pathlines of people. Of course it’s completely useless if we’re all screaming mad from our minds rejecting the existence of a fourth primary colour. (More people should read this book).

Finally, Ripley and Sarah Connor. Both are survivalist with a sense of duty. And, let’s face it, who doesn’t want to see those two kick ass back to back.

Jamie:  Jesse Custer, Spider Jerusalem, Stone Cold Steve Austin, Jessica Jones and early 70s Tony Stark. Boom WE WIN. Tanner would have to be there too rooting us on.

For more interviews with independent artists and creators, check out We Love Your Work #9: Barrett Stanley