Hey there comic book nerds and nerdettes. We certainly are living in a golden age of television and there has never been a better time in human history to be a nerd. In our lifetime we have seen the Marvel Universe brought to life on the big screen. We’ve seen every single Harry Potter novel masterfully turned into 8 feature length films, which brings me to two of the most popular adaptations of nerd culture going on right now: Game of Thrones and The Walking Dead.

Game of Thrones takes its title from the first book in the George R. R. Martin epic fantasy “A Song of Fire and Ice” series. Up to this point George R. R. Martin has published five books with a planned seven in the series. Fans of the books have endured YEARS between book releases to find out what happens to their favorite characters.

The Walking Dead is based on the ongoing comic book series of the same name created by Robert Kirkman and illustrated by Charlie Adlard. Image comics has now published over 100 issues in this landmark series. Fans of The Walking Dead have long endured one heartbreaking death of a main character after another which gives them something in common with Game of Thrones fans.

Fans of both have been known to take issue with the adaptations of these stories for the small screen, but which one is truly the greater affront to the source material, Game of Thrones or The Walking Dead?

Game of Thrones’ first season is a relatively strict adaptation to Game of Thrones the book. Except for a few tweeks to the ages of the characters in the story to make them more palatable to the general public and the invention of a character not originating in the books, the first season of Game of Thrones does a superb job of capturing the spirit of the source material.

In the second and third seasons of GOT each season mirrors, for the most part, their counterparts in the book series. There are more deviations from the source material but it is the opinion of this writer that these changes were made due to logistical issues with strictly adapting the books while still preserving tone and larger themes of the stories.

It is in the fourth and fifth seasons that the die hard fans of the books begin to take real umbrage. Between Jamie Lannister’s rape of his sister, the unrecognizable arc progression for Sansa’s character, and the general fast forwarding into to territory only hinted at in the books, fans of the Song of Fire and Ice series are livid at what they see as the destruction and spoiling of a story they have literally devoted years of their lives to following. 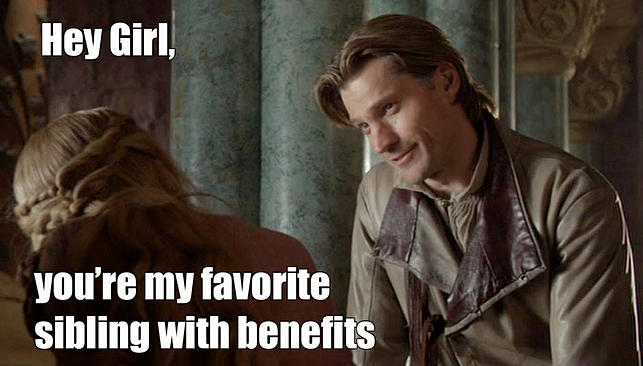 The Walking Dead launched its series by adapting the first issue of The Walking Dead comic, almost frame for frame. The pilot episode was a revelation that captured all of the heartbreaking nuance of the comics. It was extremely well cast and expertly acted top to bottom, but most importantly they didn’t pull any punches. They embraced the harsh nature of the book in its entirety.

Unlike Game of Thrones where even the harshest of detractors would agree that the first season is objectively compelling and well crafted, The Walking Dead took a nosedive almost immediately. It wasn’t the simple act of departing from the source material. Whether an adaptation should or shouldn’t depart from the source material as a rule is a discussion for another time. The problem was the way in which the TV show departed from its source material that caused the greatest problem.

If I was tasked with picking a single comic book series as the example to argue the merits of comic books as an art form in general, The Walking Dead would be among my first choices but the TV carries none of the gravitas or nuance of the books. The show lost sight of the whole tone that made the book special almost immediately opting for soap opera-esque melodrama.

I think the bastardization of the books is most completely illustrated in the differences between the change in story arc for Rick, Carl, and Shane that occurs early in the series. Fans who only know the show were given a story that, over the course of two seasons, saw Shane transition from the man who saved Rick’s life to a manipulative and calculating villain who would plot Rick’s murder. This seemingly small tweak robs Rick and Carl of their most important character developing moment..

In the book Shane does not last NEARLY as long as he does in the show. If memory serves me correctly, Shane is dead by issue #5. Unlike the show, in the book Shane is never presented as a villain. The impetus of his turn on Rick is largely the same as the show. With Rick presumed dead, Shane had become a leader of a group of survivors, fallen in love with Rick’s wife, and taken to Carl as if he was his own son. In the show his hate boils below the surface until he becomes a fundamentally changed man. The show depicts a moment in which Rick and Shane are hunting in the woods together that is a nod to the scene in the book. However it is at this moment in the book that Shane snaps during a conversation with Rick. The two have a desperate tear filled shouting match while Shane holds Rick hostage at gun point. Then, just as suddenly as it started, it was over. The art on the page depicts a bullet flying through Shane’s neck killing him instantly. The next panel shows Carl holding a smoking gun that seems bigger than he is.  See the exchange below… 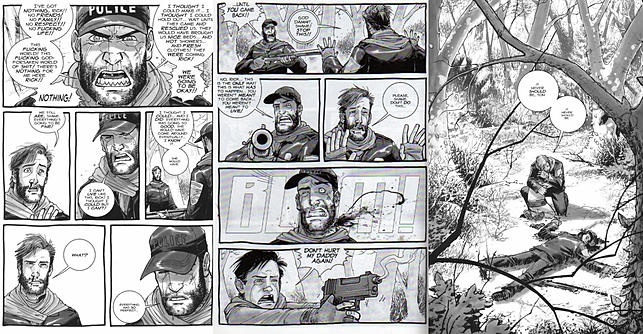 In this moment it’s not some evil plotting villain that gets killed, it’s a good man, a friend who snapped under the weight of the world falling apart around him. It’s also the moment that Carl truly loses his innocence and is the most heartbreaking moment in the series, the loss of which undercuts the character development for both of the show’s main characters.

Now that I have gotten that off my chest I would add that even if I could step into the shoes of an objective viewer with no emotional attachment to the book, The Walking Dead TV show is at times so poorly written and acted that it is laughable. Character development is so poor that it doesn’t matter when anyone dies because you as the viewer simply don’t care about them.

But what about Game of Thrones? Well to be honest, it seems at this point George R. R. Martin is more interested in the show than the books. Even if that’s not true, book readers have only Martin to blame for the show moving into storylines that have yet to occur in the books because he hasn’t gotten around to freaking finishing them!

Click here to check out our “Top 5 Sci-Fi shows of all time” article.

So that’s officially it. This writer deems The Walking Dead to be a far greater affront to it’s source material than Game of Thrones. I would love to hear your thoughts so feel free to chime in in the comments section below…