This is We Love Your Work #18: Colton & Casey Sorrels w/ David Gunawan. This creative team is responsible for the dimension hopping sci-fi adventure T.I.T.S. (Transmigrant Interdimensional Taxicab Service). Brothers Colton and Casey Sorrels are the co-writers/creators with David Gunawan providing the art. T.I.T.S. is an ongoing comic book series chronicling the adventures of three primary protagonists Starla (a Seattle PD detective), Blotter (a cosmic cabbie), and Skitz Skatz (his cosmic kitty cat navigator) and the creators are currently pushing a Kickstarter campaign to get the series off the ground. Check out our conversation below…

David: I always love comics and cartoons since my early age, there are some cartoon shows that really stand out for me, like the Thundercats, He-Man, etc.

Colton: For Casey and I it was much the same. We live in a town of rednecks and our mom didn’t want us riding 4-wheelers and hunting and fishing so we become nerd outcasts at a young age and watched a lot of Super Powers, Transformers, and all those shows from the 80’s, as well as read comics.

Who are your greatest influences when it comes to your writing/artistic style? Is there anything in particular that you find inspires or informs your work? (e.g. authors, books, music, films, architecture)

David: My greatest influence is Joe Madureira, i’ve spent many years trying to draw like him, until i finally try to do my own thing. Also Christian Lichner, Yasuhiro Naitou, and Hyung Tae Kim. I guess those guys’ works inspire me the most.

Colton: The subtle, and not so subtle drug humor in Fear and Loathing in Las Vegas, as well as Philip K. Dick’s Scanner Darkly, greatly influenced the writing in T.I.T.S. 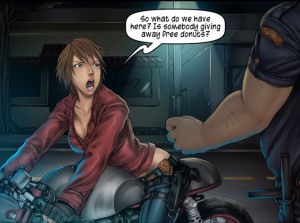 David: I draw each page by hand and then scan the pages into photoshop where colors are then applied directly over the pencils without inks.

Colton/Casey: Not really any tools, but we wanted to have decisive direction in our writing. We scripted the first 10 issue story arc and then revised each issue about 15 times before art production began. Each time David and Eve finish an issue we revisit the script for the next issue before production starts to ensure our panel descriptions are clear. We are about to start production on issue #7 so this format has worked very well for us and David nails each panel 95% of of the time.

What are some themes you hope to explore in T.I.T.S. (Transmigrant Interdimensional Taxicab Service)? 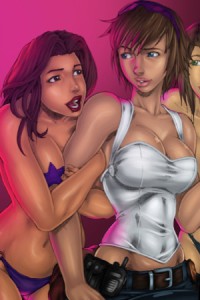 Casey: Transcendence, Expressions of duality in all facets of nature, what is consciousness, are we alone in the universe, how many beers can Blotter drink before he is too drunk to drive!

How did the concept for T.I.T.S. (Transmigrant Interdimensional Taxicab Service) come about?

Colton: A New Year’s Eve acid trip where we went on a cosmic cab ride with an interdimensional being. This being put us in our place. Years later we decided to come up with a comic idea, this experience came to mind and we developed the idea from there.

With such a tongue in cheek title, I would venture a guess that you are comedy fan. What kind of comedic influences inform the sense of humor you present in your work (e.g. Monty Python, Saturday Night Live, Douglas Adams)?

Casey: This isn’t a comic character, but I think it would be very cool to see a visual interpretation of Leto II, the God Emperor of Dune by the artist Alex Grey.

Casey: We have about 5 albums worth of music we would like to release at some point in the future.

Colton: Music is a big part of our lives and each T.I.T.S. issue is named after a song of a band we like. We have lots of T.I.T.S. spin-off ideas as well, but we hope this series will run to 70+ issues.

David: That’s a very interesting question. Maybe Bruce Lee, Mike Tyson, Wolverine, War (from the Darksiders), and Scarlett Johansson, so that when it’s done, maybe I could talk to her and take some pictures :p 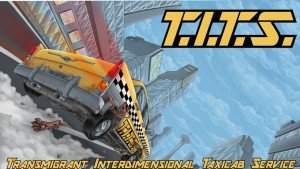 For more interviews with independent artists and creators, check out We Love Your Work #17: Tom McKnight