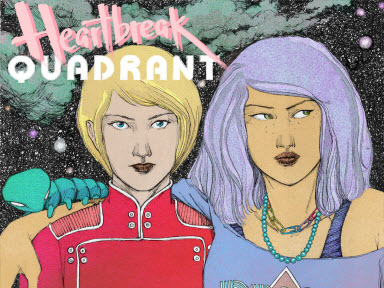 In this installment of WLYW we are talking to Barrett Stanley. Stanley is the creator/writer/artist/wizard behind the successfully Kickstarter funded comic, Heartbreak Quadrant. Heartbreak Quadrant is sci-fi tale with strong female leads that features action and adventure, with a healthy dose of humor, wrapped in a toasty warm blanket of retro goodness. Check out our conversation below… 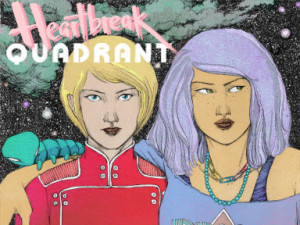 My parents were always very supportive of my interest in art; my mom painted a lot when I was a kid, and my dad was pretty skilled at woodworking. They also let me watch a lot of t.v., and cartoons of the 1980’s were definitely an early influence. I would watch basically anything, and most of those shows were pretty terrible, but you can probably still find hints of something like Jem or Kidd Video in my work.

As far as comics go, I hardly ever actually read one from start to finish – usually I’m just studying the art – but I do have a soft spot for Grant Morrison. Katsuhiro Otomo is great at slowly unfolding an epic story. Noelle Stevenson’s dialogue is a lot of fun. Daniel Warren Johnson has a wonderful knack for world-building. I also get writing influence from screenwriters like Dan O’Bannon.

Making a comic is a lot like making a film, and I draw some inspiration from movies. I love a tightly-made action or adventure film – the sort John McTiernan or John Carpenter or Ridley Scott used to make. You can learn a lot about making good comics from a good director. 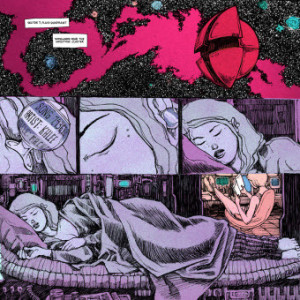 I think anyone who draws really well can be an influence for me, regardless of what style they work in. A few I could mention by name would be Bill Sienkiewicz, Francois Schuiten, Vanessa Del Rey, Jen Wang, Moebius, Frank Quietly, Jose Luis Garcia-Lopez, Travel Foreman, Travis Charest, Mingjue Helen Chen…I could honestly go on and on.

With Heartbreak Quadrant, I’m pursuing an aesthetic that’s modern but also somewhat retro. I don’t really care for the style of digital coloring that you see in a lot of mainstream comics, so I created color panels using spray paint, scanned them into my computer, and used those to give the colors a slightly grainy “analog” look. It calls to mind the comics I grew up reading, with vibrant, “flat” color that emphasizes the line work.

How did the idea behind Heartbreak Quadrant come about?

When I began developing Heartbreak Quadrant, I knew I wanted to create something in the science fiction genre, but nothing too serious or dark. I wanted to give it action and some humor, and I wanted it to be female-positive without being condescending or trite. I love stories with strong female leads, and it occurred to me that Heartbreak Quadrant could have multiple strong female leads. I started working out the main characters – Ida, Kumi, and Nim – and the story quickly grew from the characters.

You launched a successful Kickstarter campaign, what was your experience like working with the crowdfunding site? 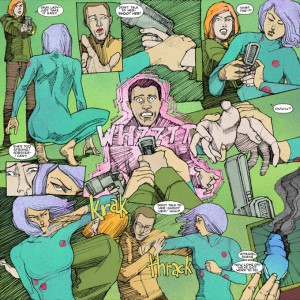 I had a great experience with Kickstarter. They did a lot to help me along, like making Heartbreak Quadrant a Staff Pick, and choosing it as the featured project across all categories for a day. The day it was featured, it got a huge response, and being on such a visible site helped me to connect with a lot of people and find new fans. If you want to run a campaign, though, you need to be prepared for a very intense month or two – it takes a lot of effort to make it a success.

What advice do you have for independent creators who are looking to get their own projects off the ground?

You have to truly commit to making it happen. You have to make sacrifices. You have to force yourself to work on it, even if you’re not feeling inspired or energetic. Set deadlines for yourself and stick to them. I work a full-time job and have a family, so I’ve had to prioritize very carefully to get Heartbreak Quadrant to where it is now. Have faith in yourself and don’t give up!

I would resurrect Leonardo DaVinci and make him draw some ridiculous Rob Leifeld character. He could re-do the Last Supper featuring the members of Youngblood! I think I just wasted a great opportunity there. 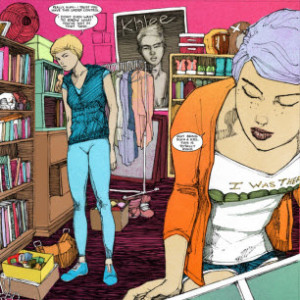 I have so many ideas I want to work on – I get pretty frustrated with my lack of free time. My current back-burner project is an anthology comic called “$19.84: the Dark Future of Retail.” I’m getting some other artists I know to contribute stories and I’m writing and illustrating several myself. I’d like to get the first issue of that out by the end of the year.

I have a concept I’m developing for a modern-day occult graphic novel, and another one for an action series about 1980’s vigilantes. So many projects, so little time…

For more interviews, check out We Love Your Work #8: Austin Hamblin