Today we present to you, the viewing/reading public, our interview with independent writer/creator Patrick Trahey. Patrick is the creator and driving creative force behind Sol Comics. Sol Comics is another independent digital publisher not unlike our own Indigo Comics. If you have the opportunity we strongly suggest you take a moment to check out some of the awesome content they are putting out, including their flagship title, The XII, which we talk more about in our conversation below… 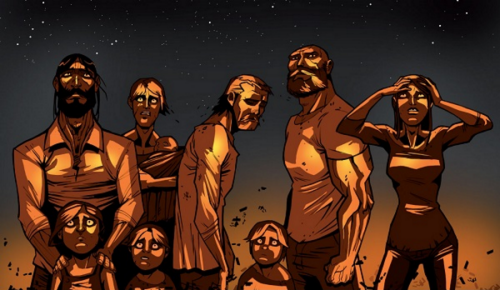 I drew a lot when I was little, but at some point I realized I didn’t have the skills to make a career out of art. I grew up on video games, and I wanted to do concept art for games, but I never pursued it. I found writing in my college years, and somehow it just clicked. It felt like the right medium for me to develop my skills, and then I drifted into comics because my background in video games drew me there.

I find inspiration from all over. In my mind, story is king, whether it’s prose, comics, film, TV, video games, whatever. I follow all of the above, and I pull from all of them. I try to incorporate a wide array of influences.

My process is a matter of hard work and routine. I lead a panel at convention called “Starting a Career as a Writer in Comics,” and the best piece of advice is simply write. There’s more to the panel than that, but it’s important, because too many people who want to write, don’t; they sit around waiting for some genius, inspired idea to pop into their head, but it doesn’t work like that. I hear so many people tell me about ideas they’ve had, but I ideas are worthless. Good stories come from execution. My process is to write at least two pages everyday. Sometimes they’re shit and never amount to anything, sometimes they’re shit and they get edited like crazy until I can stand them, sometimes they’re good and they get edited to hell anyway, but I never let ideas languish in my mind; they need to be put on paper. That may not be unique to me, but it’s important. Writing is an art, but it’s also a craft, and you only learn the craft by reading and writing.

How did the idea behind the XII come about? You publish your work digitally, what led you to choose that path?

Originally, The XII was going to be one book. I had planned for it be five issues, full story arc, done, graphic novel complete. The idea I wanted to explore was how someone could be led to join The XII. Who are they? What are their goals? What is the purpose of the city they’re building? I planned to do that in one book, but along the way a friend suggested, “If it’s called the The XII, why not write about all twelve of them.” So right now we’re working on the art for book one, but as reader’s will discover, each book has a different protagonist, different story arc, but set in the same world.

As for where the series first came from, it stemmed from a sketch I did ages ago of shadowy, hooded figures in gas masks. I had this image of them standing over a man on the ground, looking down on him imposingly, which became the first scene of issue one.

I have tons of projects on the back burner. The biggest challenge of being a writer in comics is money, and it’s the main thing that keeps these stories at bay. I have a short story I did called Murphy, which I’ve written seven issues for. There’s one called Immortality that I’ve written four issues of. I have 21 completed scripts for The XII. I have at least four short stories that haven’t been finished yet. And then there’s an idea for a series that I’m not planning to write until The XII is over and done with.

Right now I seem to going back to a reversal of good and evil. I like to cast monsters as hereos and heroes as monsters. I like lots of gray area, ambiguous morality. I think in the future I’d like to explore the idea that human beings can achieve their true potential in a system that fosters cooperation. I write a lot of post-apocalyptic stories, and I think people tend to look at that genre as though it’s proof that human beings are base, morally reprehensible beings, because when everything is taken away from us we become violent. But on the flip side of that coin, I see that potential of humanity to thrive in the right system. People are only as good as the system we are a part of, and it’s only a lack of imagination that keeps locked in their cynicism and pessimism. My stories can get pretty dark, and The XII definitely goes to some dark places, but ultimately I wanted to write a post-apocalyptic story that has a glimmer of hope. The world has been ruined, but here’s a group (with morally questionable means, granted), that is rebuilding. In a way, I like to think of it as post post-apocalypse.

If you could choose 5 people, living or dead, fictional or nonfictional, to be on your side in a bar fight, who would they be?
I’d go with five members of The XII and the other seven in reserve. They don’t start fights, they spring traps.