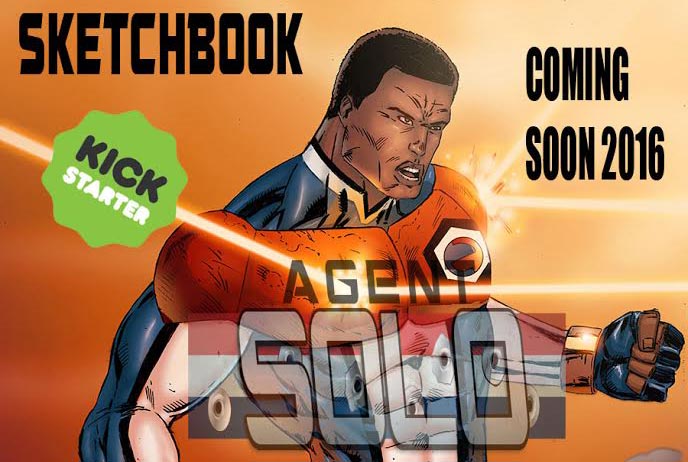 Recently we were delighted to have the opportunity to talk to Chicago based writer/illustrator/all around creative guy Raymond Leonard. Raymond is the author and artist behind the upcoming project “Agent Solo.“

And without further ado, here is our conversation with Raymond Leonard 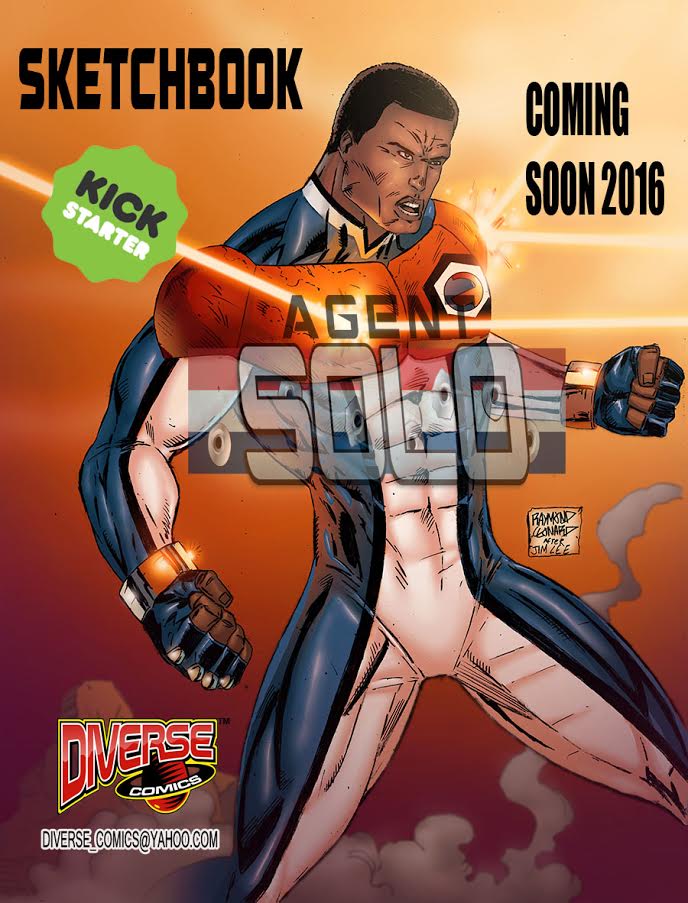 Raymond Leonard: I grew up surrounded by my family members…who were all artist. My aunties, uncles and grand father. but what got me into the comic art area was my uncle Erskine Leonard. As a kid I would watch him draw all these character’s like hulk, spiderman, he-man the list goes on. I was hooked during that point on. My uncle was a huge inspiration I wanted to draw like him, and he was also the reason I got into comics because of the huge collection he had.

Raymond Leonard:  I didnt pay attention to the names who were drawing the comics. the name noticing happened during my grade school years when The Man of Steel 1986 comic book limited series featuring the DC Comics character Superman. Written and drawn by John Byrne and Rob Liefeld took over the New Mutants for Marvel comic in 1989, then X-Force in the 90’s. I was so hooked on both artist’s style which was my influence, but I molded the Liefeld art style more then John’s. 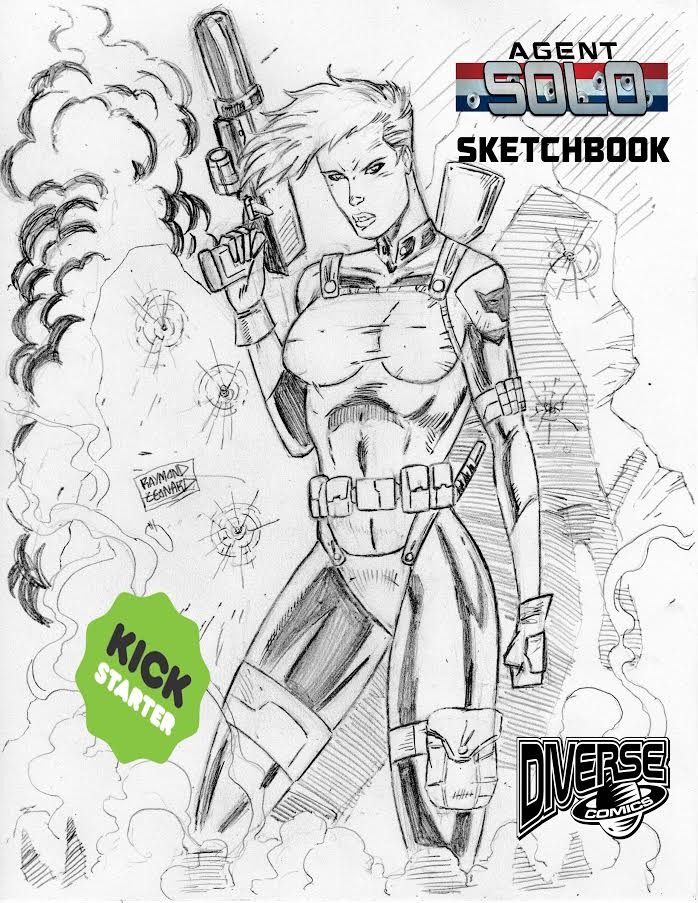 Is there anything in particular that you find inspires or informs your work? (e.g. authors, books, music, films)

Raymond Leonard: Reading motivational books on succeeding inspires me. Books like “Succeeding Against The Odds” by John H. Johnson who rose from the welfare rolls of the Depression to become the most successful Black businessman in American history; the founder of Ebony, Jet, and EM magazines; and a member of the Forbes 400.

When it comes to music…I pretty much listen to every genre-rock, hip hop, metal, alternative and techno, but its two bands that gets me amp up -Chevelle and SevenDust

Just like the motivational books movies/documentaries that inspire me are – any giving Sunday, Image revolution documentary, the pursuit of happiness ft will smith, jobs, the dragon, 8mile, nwa, ali,walk hard, james brown and rocky 2…so much more but dont want to go crazy LOL.

Raymond Leonard: I know the new in thing majority of artist are using like the drawing tablets like the cintiq, but me..im old school, 11×17 comic book boards, pencil and scanner and im set. Maybe down the round ill invest in getting a drawing tablet.

When you begin a piece, do you typically have an idea in mind of what you want that piece to be or does it evolve in a more fluid manner?

Raymond Leonard: When it comes to doing a page design etc I pretty much have the vision in my head. I do sketchy thumbnails what I visioned before drawing it on the comic board…its the old school way. but looking to invest in a light table to make the process go faster by tracing the rough thumbnails and blowing it up with the scanner to add the details. Its a trick I see Rob Liefeld do.

Raymond Leonard: I would love to have seen Jack “The King”Kirby draw my creator owned character Agent Solo, the mans work was just so awesome, every page was just full of energy and his splash pages were just mad crazy amazing. I felt really really bad that there are artists who haven’t been given credit for their work. People tend to gave credit to the writers instead. What would it be a great and enjoyable comic book without its artist. People should be fair in giving credit. And I’m honoring those are still not well known or popular artists like Steve Ditko, John Buscema and of course Jack “King” Kirby. There would be no comics without them. God bless their souls. 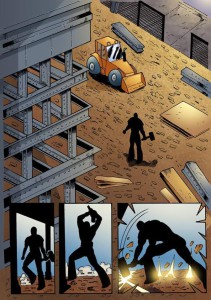 Do you have any projects that you would like tell our audience about?

Raymond Leonard: Currently i have a IP in the works called “Agent Solo” it’s a 36page colored one shot book thats going to be a kickstarter set to launch in 2016  published under my own banner Diverse Comics.  Jackson Brice is an ex-covert bionic super soldier that drops out of 7. radar and becomes a vigilante taking down high profile super metahuman terrorists and thugs [using] his way of justice. He has trust issues with the U.S. Government due to losing his best friend and fallen comrades [from] a mission he felt the Government knew about, which lead to him becoming a solo rogue agent.in this one shot hes on the hunt to bring down a villain named “Sledgehammer” whos responsible  for wrecking corporate buildings and banks but its a reason why hes doing it .its giving the readers a “what if you were in this type of situation” message . Its co-plotted and drawn by me – written by Darrell Goza. I have some amazing artists that work in in the business doing some great pinups which will be reward prints.the funding will also go to help getting a patent to get a agent solo toyline on the market. 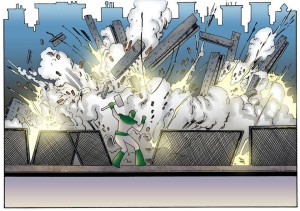 Raymond Leonard: Experience being an independent creator working outside the support of a major publisher has been amazing. I love the freedom to create  without worrying about some suit telling me this is not right or sending in a submission just to get a rejection automatic email.instead I can create something put it out there on the internet and get great feed back along with building a audience ..you get fanart of your creation its a beautiful thing.launching Agent Solo will be my first kickstarter. Im a rookie but did my homework in seeing the mistakes others do when they launch their kickstarter its either the book is not finish, the funding wasnt enough to cover for shipping. I pay attention to this type of problems because I dont want to be that guy. I’m very grateful to have great friends that had successful kickstarters helping me build it the the right way. Visit my blog …i will be updating post with art and when the campaign will start rayscomics.blogspot.com

Raymond Leonard: Hahaha thats a insane question. 5 people, living or dead, fictional or nonfictional, to be by side in a bar fight, who would they be? Dead -ultimate warrior, rowdy roddy piper and macho man randy savage/alive – dean ambrose, brock lesner and the rock… I’m a huge wrestling fanboy